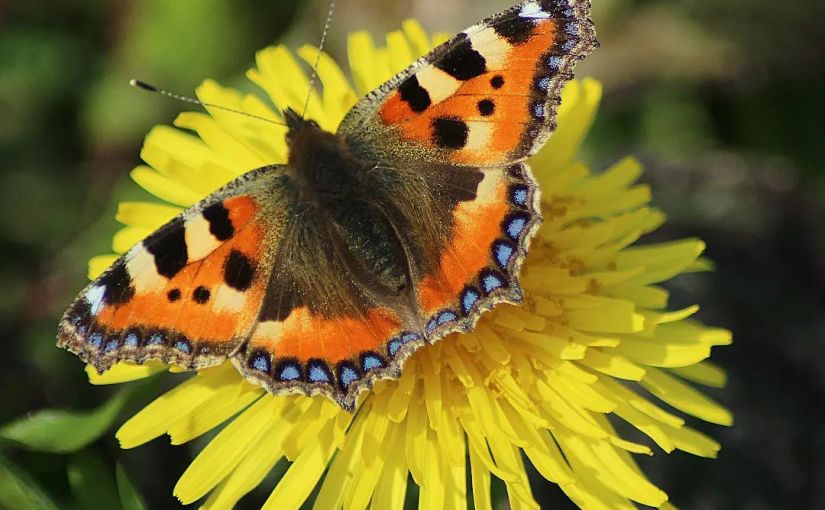 English weather rarely follows any sort of predictable pattern. It’s all jumbly, bumbling around all over the place like a drunken bee in winter.

This year, though, a period of spring-like weather has coincided neatly with the official start to Spring. How very un-British.

Just in these last couple of weeks I’ve already seen 7 species of butterfly – a very good start to the year:

In sheer celebration of this colourful and rapid emergence of Spring butterflies, here are a few photos taken over the last few days, all on the sun-kissed edges of Summerfields Woods, Hastings: 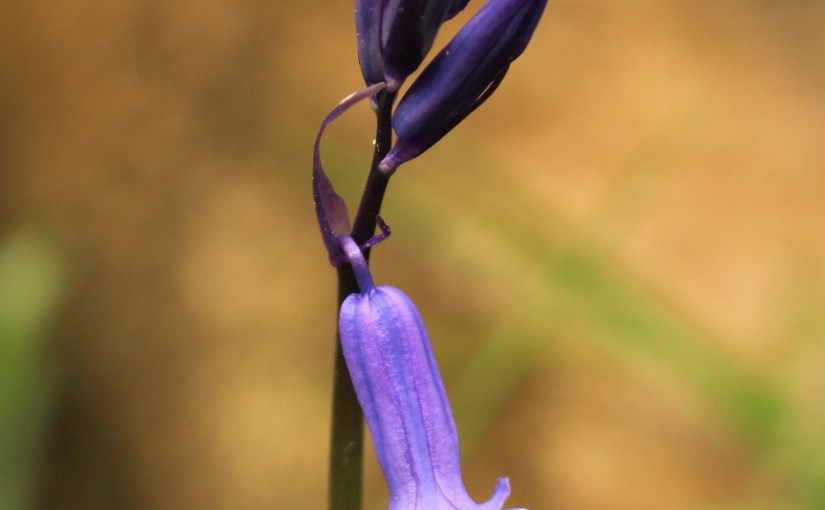 After the beautiful but short-lived heatwave we had this week here in England, lasting a mere two days, it’s a little disheartening to see such a cold forecast for the week ahead, with night-time temperatures as low as -3C.

But despite the fluctuating weather, Spring moves forward. Although she seems slow in her arrival this year, like April (in the Simon & Garfunkel song) come she will.

I love the resilience of nature and the dependability of the seasons, like a faithful lover or spouse.

As the old hymn goes: “Summer and winter and springtime and harvest…join with all nature in manifold witness to Thy great faithfulness, mercy and love.”

The divinity of nature and God entwined as one.

Today was the first day this year that I saw wild bluebells (in our local woods).

Every year, the first day of bluebells feels like a landmark moment.

Perhaps signalling the end of winter.

An auspicious icon of something new and beautiful.

On the way home, after taking these photos, I bumped into a friend and told him about the bluebells.

He pointed to his head and said, “It does something good to the mind – seeing these things.”

Indeed. The eternal spirit of Yahweh in nature bringing healing balm to mind, body and soul.

(The following photos are of Spring Snowflakes, also adorning the woods….)

One of the many things I love about Hastings is its large green spaces, with their surprisingly rich habitats.

I’m talking here about parks and woods that are part & parcel of actual urban Hastings & St Leonards, not Hastings Country Park or any of the other scenic surrounding areas.

This week, for the first time that I remember, I saw a Ringlet on the edge of Summerfields Woods (a 5-minute walk from the town centre): a butterfly I’d normally associate with the countryside. I don’t have a photo to show you as I didn’t have my camera with me…

But it prompted me to post a slightly nerdy list of the butterflies I’ve had the pleasure of seeing in urban Hastings & St Leonards over the last few years, interspersed with a few photos I’ve taken in these areas. I’ve left some of the rarer treats till the end of the list:

There may be one or two others that I’ve forgotten.

Hopefully there will be a few more to add to the list as time goes on.

In the meantime, it’s good to remember not only that Nature is unstoppable even in the face of humanity’s urbanisation, but also that humanity is in fact part of Nature.

We do well to acknowledge this oneness and thus rediscover our divinely-ordained harmony with all things.

Last night we saw 2 Cockchafers – aka Maybugs (or Melolontha melolontha) – on Briscoe’s Walk, just up the road from our house, where we walk Gorka, our dog, in the evening.

Again today I saw 2 or 3 of these scarab beetles as I was walking back home with Gorka just after 9pm, as the sun was setting.

I stuck around to see if I could get a photo or two. As I waited, more and more Maybugs appeared out of their slumber, until about 20 of them could be seen whirring around the tops of the trees.

Unfortunately they weren’t coming down low enough for me to get a photo. And the light was fading fast.

I eventually discovered that Gorka was sniffing at the occasional one that did land on the ground, so I was able to pick one up and photograph it on my hand.

The light by now was very low, and the pictures not that great. 

But a wonderful sight, to see this little swarm of bumbling beetles on this warm June night. 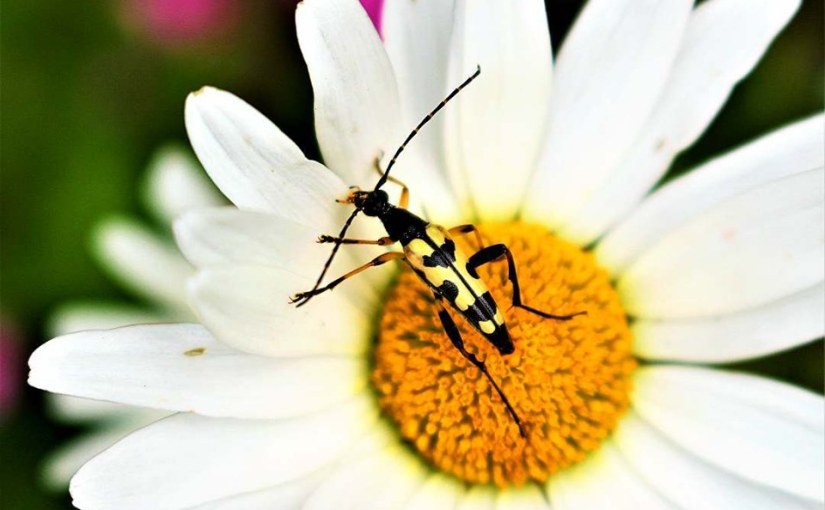 The other day, in Small Is Beautiful I wrote about a particular, magnificent patch of wildflowers on the edge of Summerfields Woods, that had thankfully escaped the clutches of various municipal lawnmowers.

The same patch that had provided inspiration for Champion Campion and Weed or Wildflower?

Today, in the very same area, I had the delight of watching and snapping this Rutpela maculata (aka Black and Yellow Longhorn Beetle).

I love this next view of the beetle peering into a foxglove flower in search of nectar.

This tiny patch of flowers is so dense with wildlife – it just keeps on producing more surprises and delights. I’m sure there will be even more to come….

While land conservation efforts are usually, understandably, focussed on relatively large areas, sometimes just the smallest local patch of wildlife takes on what might seem to be disproportionate significance.

When our local Council cut the grass verges around the law courts here in Hastings recently, I was so relieved they didn’t stray over on to this little area on the edge of Summerfields Woods that was delightfully overgrown with long grass and wildflowers.

This is where I photographed the Red Campion for ‘Champion Campion’, and the Ribeye Plantain for ‘Weed or Wildflower?’

It’s also saturated with all manner of other wildflowers, including Oxeye Daisies, Horseshoe Vetch, Foxgloves (pink and white), and Clover (red and white).

As for butterflies, this week has seen Large Skippers, Common Blues and Meadow Browns enjoying this rich diversity of flora.

Then a few days ago I learned that this wild patch was left alone by the Council only because it in fact belongs to Optivo, the housing association that also owns the neighbouring block of new flats.

I’d been chatting to a fellow dog-walker who lives in the block.

He told me that residents had been complaining to their landlord about their communal garden area which had overgrown; that Optivo had responded and were soon to cut it back.

My fear was that the housing association would mow down the wildflower patch at the same time. In my experience, Councils and other bureaucratic landowners generally have far less regard for wildlife than they do for keeping green spaces neat and orderly or concreting planet Earth.

I was genuinely worried and even considered contacting Optivo asking them to preserve this mini-wilderness.

Thankfully, however, it was left alone. Another reprieve for one of my favourite little patches of land. Phew! Another answered (unspoken) prayer.

One to watch in future years, though, I reckon.

Things are hotting up for butterflies around Summerfields Woods in Hastings during this warm spell. Meadow Browns and Large Skippers are coming out in force.

And today was the first day this year that I’ve seen that famously marathon-flying migrant, the Painted Lady. There were a few of them there today, enjoying the blackberry flowers on the edge of the woods, near the ambulance station.

The area must be no more be no more than about 200 metres from the seafront as the crow (or butterfly) flies.

So my guess is that these specimens had just arrived from their ultra-long journey from the continent, perhaps even North Africa.

This was probably their first stopping point, replenishing their energy on that bramble nectar.

Watching these elegant and exotic visitors, knowing they were nourishing themselves at the end of such a mammoth trek, was quite a privilege.

When I was a child, my Dad would spend precious time spreading weedkiller over our expansive garden, in a bid to rid his nice, neat lawn of daisies. I never understood it. To me, the daisies enhanced the green grass. Wildness was my way, nature my delight, from early on.

The old saying – one man’s weed is another man’s wildflower – is so true.

…which, to me, is looking pretty amazing just now – in the same area as the Campion that I photographed on the edge of Summerfields Woods a few weeks ago (see Champion Campion).

Like the Campion, taking a few pics was irresistible.

My Dad and I didn’t see eye to eye on a lot of things for a long time. But the Source of Life, the giver of grass and weeds (or wildflowers) is also the Instigator of Reconciliation.

The Spirit has a way of bringing about profound change in our lives, and the relationship between my Dad and me was miraculously and permanently restored, as you can read about in my autobiographical book on physical, psychological and spiritual homelessness: Coming Home for Good.

Love – the kind that comes from above – transcends not only differences of opinion on flowers, but also personalities, cultures, races, worldviews and, yes, even religion.

The Red Campion, with its pink petals fusing together into a reddish, ribbed tube, has been quite stunning on the edges of our local woods this Spring. Especially one particular patch saturated with Campion, that catches the early morning sun on my dog-walks.

I had to go and take some photos.

And then some more photos.

It’s funny but I don’t remember seeing or noticing the Red Campion in previous years. Maybe it’s having a bumper year. Probably. But I also think I may have passed it by in former years, without giving it a second glance.

How often do we miss the wood for the trees? Fail to see the extraordinary in the so-called ‘ordinary’?

This morning, as I took communion, I was reminded that Jesus deliberately chose ‘elemental’ things (bread and wine) to serve as ‘sacraments’. The extraordinary in the ordinary. The spiritual in the material. Breaking any division between sacred and secular.

Mindfulness and meditation, whether with a Christian or Buddhist basis, or without any sort of spiritual slant, can help us connect or re-connect with nature and other things and people around us, with God and with ourselves.

Or perhaps rather to (re-)discover the interconnectedness of all things, that was always there. And to notice the wonder of all things.

Thank you, Red Campion, for the reminder.

When I was growing up, the stunning Small Tortoiseshell was one of the most frequently seen Spring butterflies, as they emerged from hibernation. In mid-summer, they’d be seen in significant numbers on buddleias, along with Peacocks and Red Admirals.

Now they seem to be sadly scarce, at least in my part of the world. This shiny specimen, that I managed to photograph on the edge of East Hill, Hastings, on 5th May, is in fact the only Small Tortoiseshell I’ve seen so far this year….

…and (more unusually) the Holly Blue.

The Holly Blue, with its delicate silver-blue underwings, has been conspicuously prolific round this neck of the woods this Spring. I don’t remember seeing this many in any previous year. Apparently, they’re renowned for fluctuating wildly in numbers, believed to be caused by parasitism from the wasp Listrodomus nycthemerus.

“This neck of the woods”, by the way, is mainly Summerfields Woods in Hastings, where I snapped this particular Holly Blue feeding on something in the brickwork of the Walled Garden, as well as the Speckled Wood above.

Always good to see a life or a species doing well, giving us a glimpse of beauty beyond.